Public Surveillance Cameras - Are They A Waste Of Money?

Technology and its advancement are a blessing and have bettered the lives of many. However, not everyone uses technology for the right reasons. Every single day, new threats arise and many innocent lives are endangered by committed crimes. This is even more so due to technological advancements.

To curb this, many public institutions opt to use surveillance cameras to monitor and look out for suspicious activity, help fight crime and keep the general public safe.

What Are Surveillance Cameras?

They are mostly used in public setups. It has more advanced features than normal security cameras which makes them well equipped to handle all types of surveillance activities.

While security cameras aim at deterring criminals and criminal activity, surveillance aims to track and detect specific persons who are suspects of various crimes. This means that their activity is widespread and the scope of monitoring and analyzing is far more advanced than those of security cameras.

They work on an IP network. This network links the cameras from the remote location to transfer the video to specific or assigned security areas. 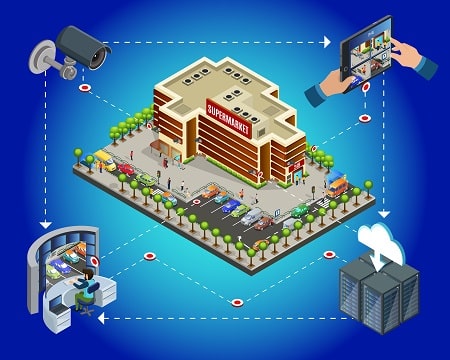 There are many different types, with varying features and uses. However, the data collected can essentially be used to monitor and track down individuals. Features such as facial recognition are crucial when it comes to analytics. Most videos can be zoomed in to show the faces more clearly. In cases where crimes have been committed this helps the authorities capture the criminals a lot faster.

Another unique feature that they have is that there are some specifically designed to capture license plate numbers. This information can be crucial when tracking down suspects.

At the heart of surveillance is crime-fighting. It aims to reduce crimes committed but it also seeks to track down perpetrators of crime and bring them to justice. Since the cameras monitor events in real-time, they can also be useful when it comes to saving lives.

They often transmit data over the internet. This allows for remote access and monitoring. It also means that data can be shared easily which allows for easy problem-solving.

Why Use Cameras For Surveillance?

Generally, it is public institutions that have the privilege of using cameras for surveillance purposes. There are few cases where members of the public have been granted permission to own and use them but these are very rare cases.

In the case where a member of the general public would like to install a surveillance camera, they would have to seek special permission, providing good reasons to be allowed to install them on their private premises.

There are several reasons why there are many restrictions surrounding surveillance cameras some of them include;

Cameras used in surveillance have many useful benefits including; fighting crime, effective data sharing, facial recognition, license plate capturing, and much more. They generally help keep the public safe and also help the police to solve cases and even prevent future events. Though many are against the use of these kinds of cameras for surveillance, they have many useful benefits that justify both their use and their cost.