The origins of Closed Circuit Television and surveillance technology trace back to 1927. While previous CCTV cameras had poor frame rates and low-quality resolution, modern versions are high definition and have several advanced features. With these high-quality surveillance cameras, law enforcement and monitoring capabilities have become much simpler, making it difficult for criminals to escape the system.

While CCTV cameras have been around since the 1920s, their limited capabilities restricted their applications. It took almost half a century for surveillance cameras to record footage in real-time and allow police officers to review and scrutinize old tapes and switch to new ones. Large industries and banks were first to adopt CCTV cameras in the 1970s paving the way for consumer-based surveillance.

After this period, there was a significant increase in CCTV cameras in public locations, with the United Kingdom being one of the first Nations to adopt this system. The idea was mainly to improve citizen safety by deterring criminal activity, a practice that has been hugely successful since then.

Modern industries have quickly followed suit, and with advances in technologies such as night vision, motion detection, and face recognition, surveillance has become the number one tool in improving safety.

While there are concerns about illegal monitoring and a lack of privacy in closed spaces, public video surveillance is still a top tool in crime prevention. The idea behind CCTV cameras is not only to monitor population movements but also to help improve safety.

Since its inception, modern surveillance technology has reduced consequent crime rates by up to 50%. You are looking at a system that consolidates public surveillance and privately operated cameras in businesses and exclusive residences.

For detectives, CCTV is the number one tool for fighting crime both before and after the fact. Law enforcement can now review tapes, flag suspects, and apply facial recognition tech to locate them before committing a crime. Dangerous criminals such as terrorists and criminals on global watch lists are easily identified and apprehended through this technology, drastically reducing their operative capacity.

Security cameras now play a fundamental role in intelligence gathering and analysis. Since the 1990s, surveillance technology has equipped the police with the tools needed to apprehend and prosecute criminals. CCTV footage is now a key piece of evidence in courts, and it has been critical, especially when there is a lack of forensic evidence. Let’s look at some of the ways video surveillance assists police officers. 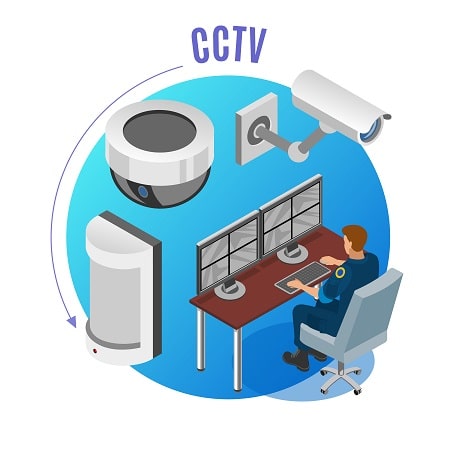 The biggest challenge in law enforcement is the consistent issue of mistaken identity. While eyewitnesses are still a fundamental part of securing a conviction, they are still unreliable and in many situations, inaccurate. On top of this fact, eyewitness accounts are also problematic because very few people have photographic memories and hence may not identify a suspect.

For CCTV cameras, however, the increased precision, clarity results in quality footage. A recent study found that up to 99% of murder convictions had little to no forensic evidence. Law enforcement agents now have night vision, zooming capabilities, and facial recognition tech that can identify a suspect with an accuracy to within a percentage point.

Convictions have also been overturned because of this technology, as previous eyewitness accounts were faulty and unreliable. Several cases are now under review as surveillance cameras have helped exonerate the innocent. Surveillance cameras have revolutionized crime-fighting, giving police officers a more accurate way to identify, track and apprehend criminals.

With modern monitoring and detection devices, police officers can track criminal behavior, identify suspects and use CCTV footage to get search warrants. These capabilities mean that there is no red tape when it comes to searching private premises.

With security camera footage, the police can establish probable cause after identifying individuals with criminal intent.

Before the 1990s, police officers heavily relied on ground patrols to curb criminal behavior. Although it was relatively effective, it required a lot of human resources. Modern security cameras cover huge areas, and they provide round-the-clock monitoring. All an officer has to do is review the footage and identify where to look. Combined with the investigative knowledge of law enforcers, CCTV footage now equips the police with a cost-effective, convenient way to track criminals.

Here, you have a system that operates 24/7 and can be used by private citizens to help police prevent and solve crimes.

CCTV has come a long way since its inception, and with constant improvements in technology, it has become a fundamental tool in law enforcement. Many metropolitan cities are now heavily surveilled, which is the main reason for decreased criminal activity.