Privacy Laws and What they Mean for the Small CCTV Camera

There was a time when spy cam strictly meant a nifty little gadget that a real espionage agent would carry along in missions to capture photos of secret documents. Well not anymore. We are all well-equipped potential spies now, all of us carry tiny cameras in our pockets all the time.

Ours is an age of surveillance where somebody might surreptitiously station a small CCTV camera in your home and observe you all day. Everyone is watching and privacy is a relic. The number of gadgets that might be spying on you is ever-increasing and the government plays a huge part in it.

For example, in the US alone, an estimated 30 million surveillance cameras record 4 billion hours of video every week. This of course seems paltry when compared to the 200 million surveillance cameras in China but it is nonetheless disconcerting. The moment you step out into the street, assume you are being watched as that is likely to be the case.

But what about your neighbor, your coworker, or even your spouse. Could they also be watching you?

The Legality of a Small CCTV Camera

While most countries allow filming in public, the laws surrounding secretive filming commonly revolve around the question of whether the individual being recorded has a reasonable expectation of privacy.

A reasonable expectation of privacy is implied to protect people in areas that are generally considered to be private. This incorporates places such as bathrooms, bedrooms, locker rooms, and hotel rooms where shooting would constitute a breach of privacy.

Though to be certain, one should always check on the specific laws in the state or country they wish to film in.

When speaking of small CCTV cameras, this is not just limited to covert spy cameras. Other very small CCTV cameras exist that are not made for spying. For many of these, their miniature/compact size is simply a function of the job they'll be performing- cases where being bulky would hinder performance in some way. The common ones include:

These mini CCTV cameras are built to blend into their surroundings and be as inconspicuous as possible. As such they are normally incorporated into everyday devices such as bulbs, eyeglasses, and air fresheners. Factors to consider include:

Are small CCTV cameras designed to give parents peace of mind when they leave their child in the care of a nanny or when the child is alone, or perhaps sleeping. Important Features to take note of are:

Designed with movement in mind, these small CCTV cameras need to be both compact and user-friendly such that they do not interfere with the job the wearer is performing. They are frequently used by outdoor adventurers and law enforcement. Factors to consider include:

Privacy Laws and how they Pertain to Small CCTV Cameras

Most small CCTV cameras are used with good intent. Even when not, the right to a reasonable expectation of privacy and one-party consent does offer a reasonable safeguard against intrusive filming.

While some use cases only need to cover a fixed area e.g. a garage, those covering large spaces will need wide-angle lenses. A pan, tilt, and zoom function also allows you to alter the field of view for optimal surveillance so you do not miss anything. 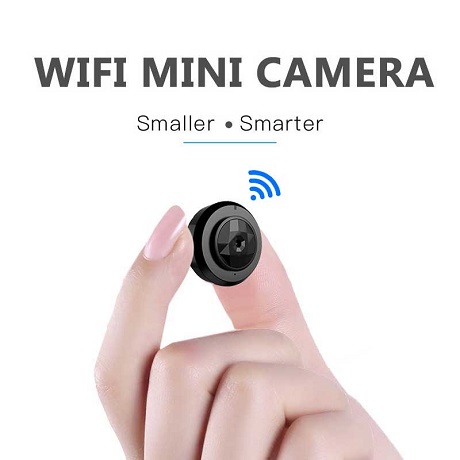 Small businesses can even opt to work with the cheaper home CCTV camera options.

Where they begin to differ is in the value that a high-tech surveillance system can bring. Chief of which is video analytics. Video analytics is the use of software to examine real-time footage and identify desired attributes, patterns, and events of interest.

This software integrates with what is usually an IP digital CCTV camera system to provide enhanced security features such as facial, object, and behavioral recognition. With this artificially intelligent system, a business can have oversight on elements that are either supposed to be or not to be in certain areas of the premises.

Stock can be monitored leaving and entering the premises so that it is all accounted for. Other advantages include:

b) Improved Safety - Due to the footage being evaluated in real-time, crimes can be stopped in real-time too rather than after the fact.

c) Business value - Behavioral monitoring of customers gives valuable insight into people's choices. Retailers use this to provide better service and options desirable to the consumer.

d) Scalability - it is easier to add more cameras to a wireless CCTV camera system than a hardwired analog system.

A high-tech CCTV surveillance camera system does more for a business than adding security. It reduces losses and improves the bottom line by offering business insights where possible.